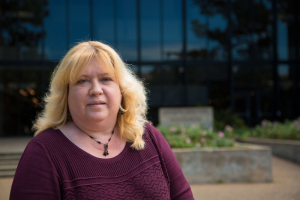 One-third of the world’s population is infected with tuberculosis (TB), which is the leading cause of death for those infected with HIV. In 2014, almost 10 million people around the world became sick with TB, and 1.5 million deaths occurred worldwide, according to the Centers for Disease Control and Prevention.

Earlier this year, Frontiers in Cellular and Infection Microbiology published a computational study conducted by Cheryl Sershen, a post-doctoral scientist who works in biomedical engineering professor Elebeoba May’s Multiscale Immunobiology Design Algorithms and Simulation (MIDAS) Lab at the UH Cullen College of Engineering. Co-authors on the paper include Stephen J. Plimpton, distinguished member of the technical staff at Sandia National Laboratories, and May, who serves as senior author of the paper and principal investigator of the study.

The study involved the development of a multi-scale computational model that integrates physiological, cellular and molecular-scale host responses in order to test the extent to which Mycobacterium tuberculosis (Mtb) granulomas become hypoxic – that is, lacking adequate oxygen – in vivo.

Tuberculosis granulomas, which are collections of immune cells and bacteria, can aggregate in the human lung when people inhale Mtb, the harmful bacteria that cause tuberculosis. Immune responders, such as T-cells and macrophages, attempt to form granulomas by surrounding and containing the bacteria.

While Mtb granulomas, a hallmark of latent TB infection, are the focus of various experimental studies, few investigate the dynamic link between tissue-scale structural changes, hypoxia, and the effects on host immune response efficacy and mycobacterial persistence in human disease. Understanding this link is the focus of the paper.

The model reproduced World Health Organization (WHO) estimates that approximately two-thirds of healthy people exposed to tuberculosis clear the infection, and the others either contain or disseminate the bacteria. The infection disseminates when recruitment of immune cells cannot keep pace with reproduction of bacteria, which consequently spread to the rest of the lung.

The model by Sershen and her collaborators is the first to explicitly capture oxygen consumption by immune cells and bacteria in the lung tissue and demonstrate that oxygen in lung tissue is depleted as granulomas form, the authors said. Granulomas allow the immune cells to contain the bacteria so that the disease does not progress. In some cases, oxygen levels drop below 2 percent, which is a state called hypoxia. In that environment, bacteria may potentially enter a stage of non-replicating persistence, meaning that the TB bacteria are no longer growing inside of the host. While the TB bacteria are still metabolically active, the infection becomes latent. Patients with latent TB infection (LTBI) will not have symptoms or feel sick, and although they remain infected with the disease they cannot pass it on to others.

“That’s an effect of oxygen, and that hadn’t been computationally explored,” Sershen said, referring to the ability of the model to capture the oxygen-driven metabolic response of Mtb. “Containment, which can be predicted by the model, is the next best thing to clearing the infection because physicians can treat the latent tuberculosis infection with a combination of chemotherapeutic agents.”

The theoretical studies by Sershen and her collaborators demonstrate how the dynamics of granuloma organization mediate oxygen availability and illustrate the immunological contribution of this structural host response to infection outcomes. Their integrated model demonstrates the link between structural immune response and mechanistic drivers influencing Mtb's adaptation to its changing microenvironment. Furthermore, their research shows the qualitative infection outcome scenarios: clearance, containment, dissemination and a novel theoretical outcome of transient containment.

The multi-scale modeling work in the May MIDAS lab has been supported by grants from the Department of Defense’s Defense Threat Reduction Agency and  Sandia National Laboratories Department of Energy’s Laboratory Directed Research and Development program.